I think I successfully installed Jitsi and associated it with my custom domain. In any case, it resolves when I go to the URL. When I launch a session, however, I’m asked if I’m the host and when I respond affirmatively, I prompted for a User and User Password. Thing is, I don’t recall setting a User and User Password as the admin. I tried entering the same UN/PW associated with my Reclaim Hosting account, but, while that didn’t fail directly, it led to a screen saying Connecting which never ends up connecting (see screenshot). 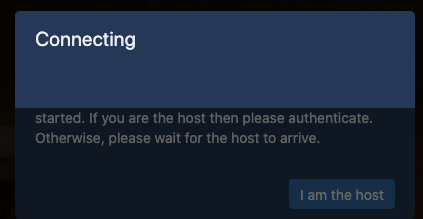 Where would I find the correct admin UN/PW or how can I set such a UN/PW?

Thanks for posting to the community forums, and very cool you installed Jitsi, I have become a big fan.

You get this username and password at two points after installing the application, the first time in the Reclaim Cloud interface itself after announcing the installation was successfully completed: 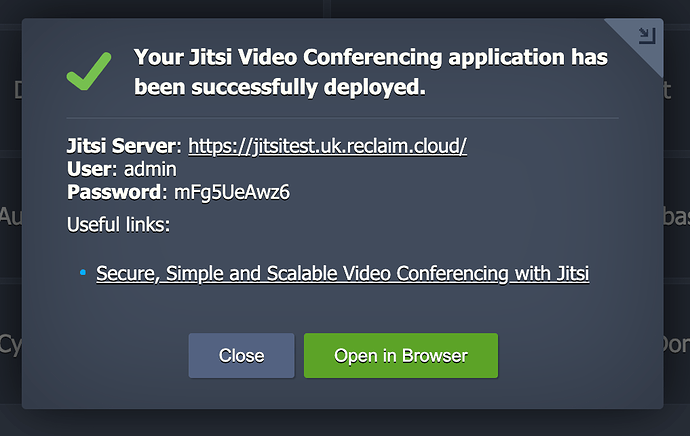 You may not have captured that, but no worries there is also an email that was sent with the same info: 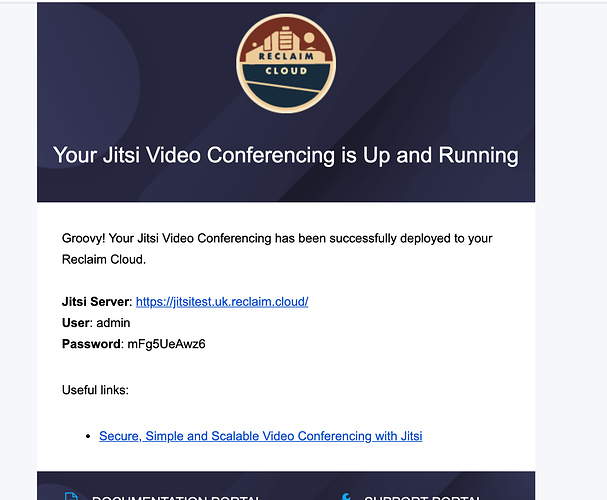 If you can’t locate either one let me know.

Ah, yes, found the email. That’s what happens when I start a project and then put it aside for several weeks.

I tested it out. Maybe there’s more configuration I can do on the back end, but the connection for me was pretty poor. Significant prob with synchronization between video and audio as well as lots of audio dropouts. Both users were using wired connections.
Anyway, thanks again for your help.

Strange, it’s been rock solid for me. Did the connection indicator suggest bandwidth issues? Green usually means solid, yellow iffy, and red bad. Each user has an indicator of how their bandwidth is holding up. If you want someone else to test with you just let me know.