The thought occurred - how hard would it be to set up Mastodon on reclaim cloud? I know there are some posts on the ‘regular’ reclaim asking about Mastodon, but of course, cloud changes everything!

Is anyone giving this a try?

I’ve done a bit of noodling around, and found this GitHub - Wonderfall/docker-mastodon: All-in-one unofficial Mastodon Docker image, if you want that. which might work… (not entirely sure about the ‘not scalable’ proviso though)

Yep, Mastodon is on the brain for a lot of people today.

Mastodon does not seem to have an official Docker-based setup but they do have a guide here:

For projects that are as complicated to host as this, I tend to recommend people stick to the official documentation as much as possible. They recommend using an Ubuntu 18.04 VPS. It’s a little disappointing to me that their guide hasn’t been updated for a newer version of Ubuntu (although its possible it would still work fine).

When making a new environment in Reclaim Cloud I would choose the VPS option, then Ubuntu 18.04: 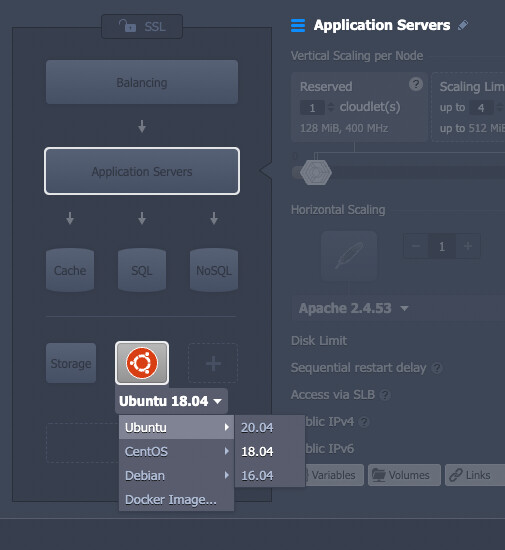 From there you would add a Public IP, and follow their instructions.

For those interested in doing it for edtech/classroom settings, it might be worth looking at the Hometown fork of Mastodon: Local only posting · hometown-fork/hometown Wiki · GitHub

The link is to a special feature that most Mastodon instances don’t have: local only posting which would allow students a level of privacy and separation from the rest of the federated timeline if they choose.