I may not have my terms down, but is there a way to move the Installatron Application Installer icon above the fold of the dashboard? I know the ‘view more’ link of featured applications goes to the same place, but it’s 1) a bit lost in the grey bar, and 2) it shares link labeling with my applications, so makes it difficult to refer to in support documentation specific to my institution.

I’d like to write docs that say “look for this” and plunk down the installatron button. Moving it above the fold might make it easier for folks to find.

This is absolutely something we can customize for Muhlenberg, and may be a better option for many. So, to be clear, you want the Installatron icon here:

To be in it’s own section at the top, something like this? 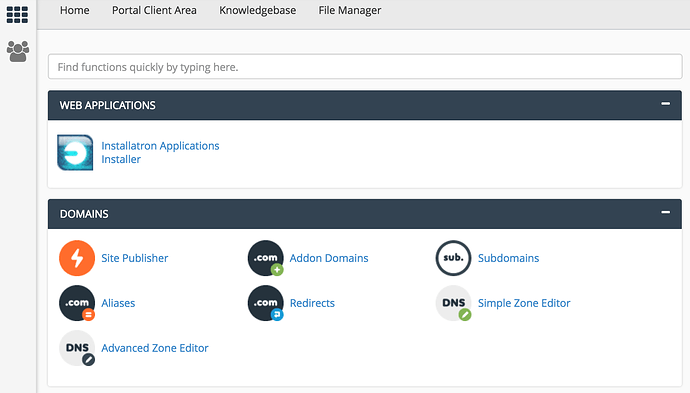 Let us know and we’ll work on this because this is just the kind of feedback we would love to have to make the core of the hosting more accessible and user/documentation-friendly.

Yes, exactly. And thank you!

I know this isn’t something likely to be fixed by Reclaim, but I deeply miss featured applications by directly on the CPanel. Having to click that button hides what I would argue is the most used part of CPanel for us.

I see what you’re saying @floatingtim, it’s not clear in the widget here how you would get to the list of all applications since both View More links go to different things and aren’t very obvious to begin with 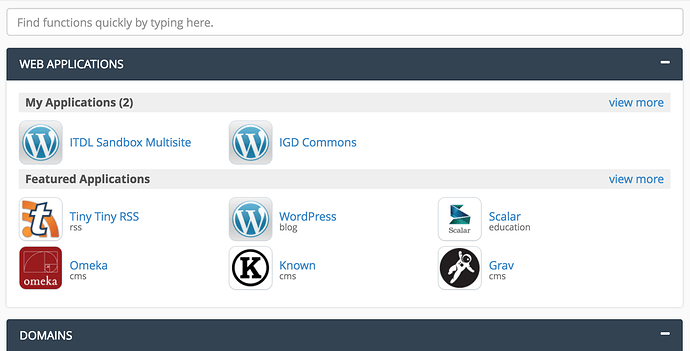 I can remember a long time ago telling Installatron that it would make sense for the icon they use under Software to live somewhere in that widget. I don’t know what control we have over the placement since the widget itself is its own sort of thing generated by Installatron but I’ll look into it.

I deeply miss featured applications by directly on the CPanel

I still have an open ticket and have been taking Installatron to task on this. What’s a real head scratcher is that so many of our servers suffer from not showing the widget properly, but yet Muhlenberg’s server doesn’t seem to suffer from it as best I can tell. I don’t get what could be causing it and the inconsistency at which it sometimes doesn’t display has me baffled (and unfortunately Installatron support has become beyond useless). Maybe a separate feature request we should have open for discussion is a possible move to Softaculous which is something we discussed internally at Reclaim but never made any commitments to.

I wonder if we don’t build our own cPanel section using their plugin architecture. I played around with it this morning and came up with this:

The downsides are that featuring applications would not be a function of Installatron at all, it requires the plugin be modified and reinstalled (the plugin also stores its own images which I created for this). So it’s less able to be customized. It also wouldn’t be able to show icons for each install created like Installatron does but I did add a link that goes directly to “My Apps” as a workaround. The obviously huge benefit is that this doesn’t rely at all on Installatron and will appear 100% of the time at the top.

I like this as a temporary work around, and as much as customization is nice and potentially useful, this aspect is not something that is changed regularly. In fact, for many they haven’t even had it thanks to this bug. We could ask a school once what apps they want to feature and have that be the case for a year or so. As for our shared hosting servers, we can make that uniform. 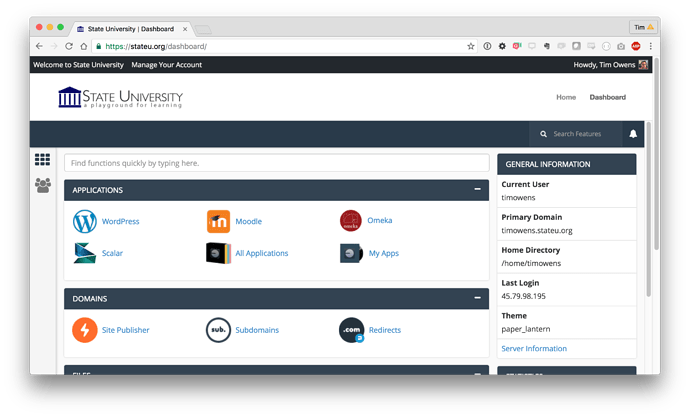 And you’re right @jimgroom it would be trivial to change the list of apps for schools and it’s rarely updated once the featured apps are chosen. Let me know what you think @floatingtim and @acroom we can definitely get this added in to OU’s servers if you like it, just let me know what your list of featured apps would be (Either 4 or 7 apps seems to be a good number for symmetry even though the page is responsive so they’ll get bumped down on smaller screens).

This is awesome, thank you! This will be great as we start to design our training. The ‘all applications’ and ‘my apps’ icons should help us bridge to concepts with which folks are already familiar (All Applications seems very similar to me to an app store, for instance).